SEO experiment: do reviews in maps affect the results of website promotion?

Promotion of any business on the Internet is quite simple ... in word. Give the site potential buyers, and everything will be great. But at the same time, many factors should be taken into account: the readiness of the site for a large load of visitors, its convenience, how it looks for search engines, and what phrases it is searched for. 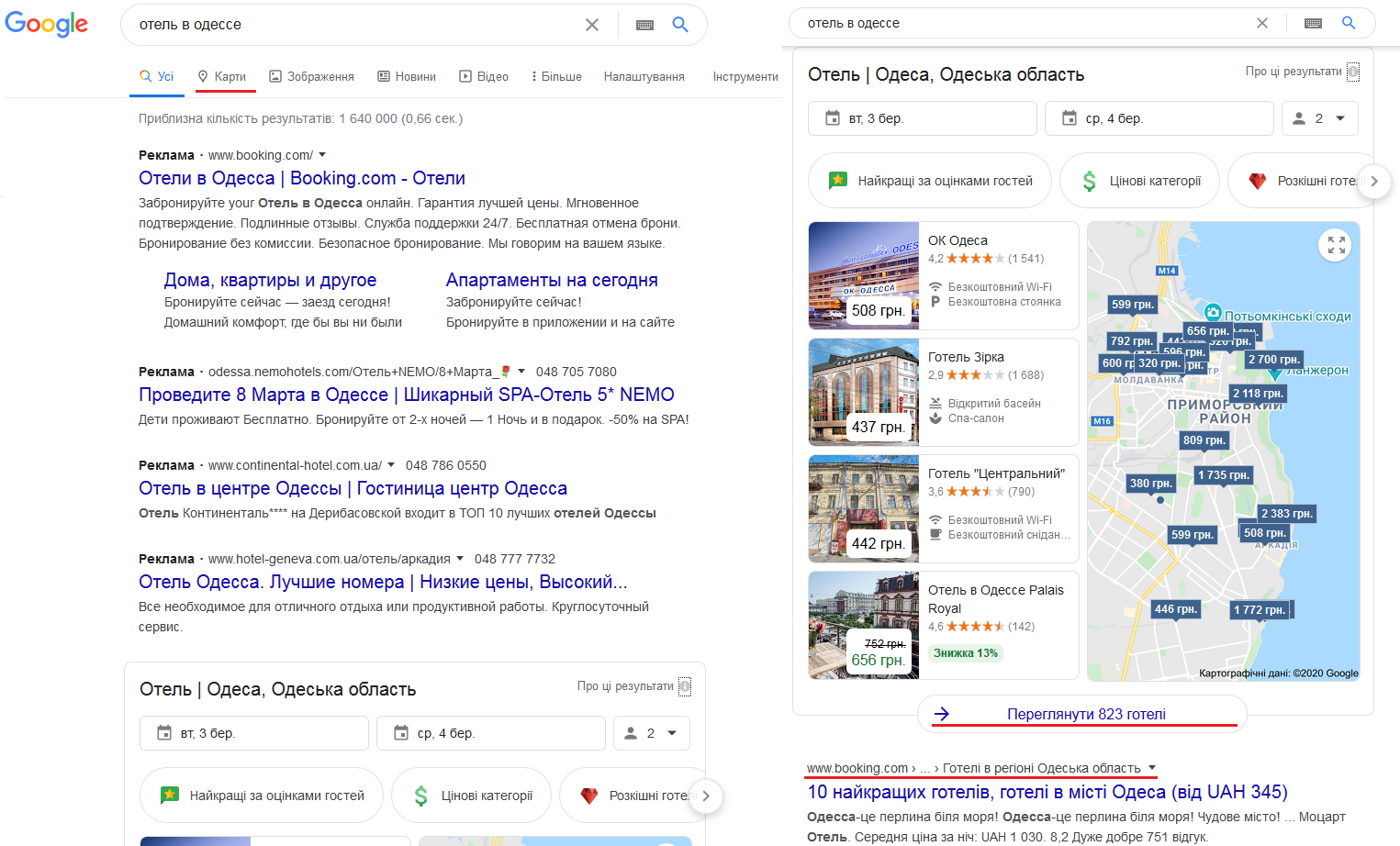 As you can see, it is difficult to compete with Booking. But it's also possible ;-)

How to promote the site with the help of reviews? Search engine map experiment

Maps are a local search tool, which means they can help in local website promotion. So with their help users can easily find the right store, hotel, salon, clinic - either in their own city, its district, or in another. If you have to go to another city then the fastest way to find an attraction, restaurant or hotel is using maps.

When a company card is shown upon request in maps, the user sees photos of goods or services, company address, contact phone number and other information that is necessary to satisfy his intent.

An additional advantage of finding the right company on the maps is the ability to read reviews and leave your own assessment of the activity. So it is important for companies to have:

Important: when receiving negative reviews and bad ratings, you need to work with the negative, and not just try to remove them. It looks not only natural, but also is an additional factor of trust. The presence of only good reviews in the card raises doubts about their reliability.

Imagine that you have a toothache on vacation, and you urgently need to see a doctor. How to find him? Let's ask Google where a good dentist is in Odesa. 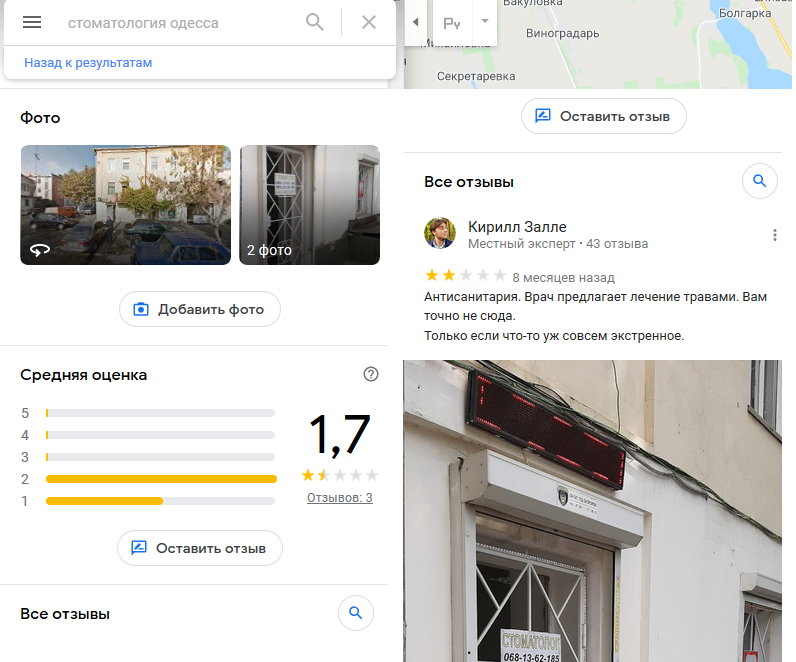 It is clear that such a picture does not inspire confidence. Let's see what other options there are: 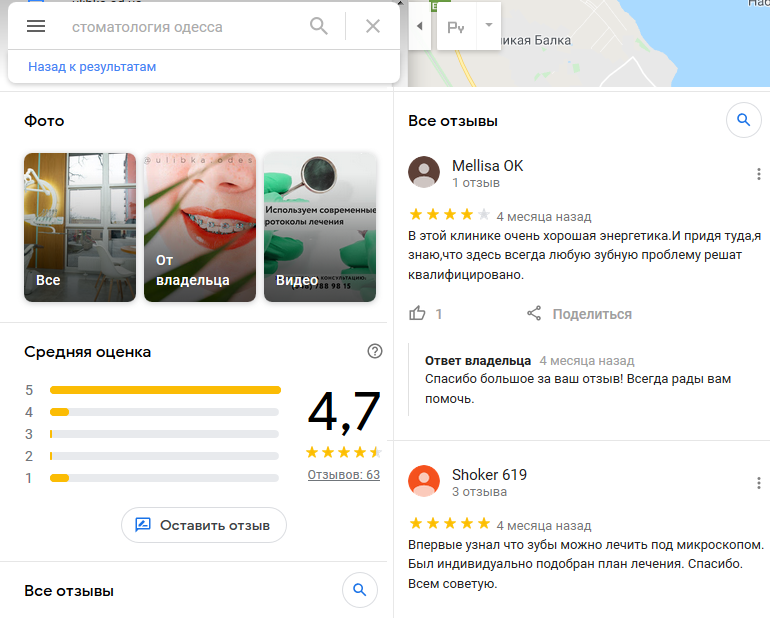 The second example creates a pleasant impression. The clinic has:

I dare say that this clinic has no problems with patients, and many of them are served on an ongoing basis. Dream of any business :-)

What is the essence of our SEO experiment?

Our experiment was to track the impact of reviews on cards in search engine (SE) cards. We tracked the impact both on the card itself and on the company's website as a whole.

The SEO experiment was conducted on maps in Google and Yandex. Two types of companies were selected for work: hotel and services.

But here we have a question: how to get regular feedback that would meet the requirements of our hypotheses? We solved this problem with the help of copywriting marketplaces. Of all the available options, we chose Advego.ru and Qcomment.ru. We have to warn you right away: given the peculiarities of the operation of the review moderation algorithms on Yandex.Maps their cost was twice as high, why? We'll tell you below.

To track the results, the following control data was defined:

Working with reviews on Google Maps

For the experiment with Google maps, we took the sites of the Odessa hotel and dentistry. Control data for sites at the start that participated in the experiment are given below:

In our opinion there’s a honey drop: in the last year, Google has repeatedly focused on the fact that all YMYL-themed sites (medicine, law, etc.) will be checked more carefully and so the information should be not just on the topic, but as expert as possible. With this background the functionality of the online marketplaces provides a recommendation “to be guided by your own experience” when placing orders for reviews for various clinics and medical centers. This should be taken into account when drawing up a task for exchanges.

Since our task was not just to write a certain number of reviews, but to be useful to the project, for the experiment we selected projects where our company employees had experience of interacting as a regular user. This made it possible to write the most useful and practical reviews and be fair in assessments, albeit subjectively.

The SEO experiment on reviews on Google Maps lasted for 4 months. During this time, on the cards of pilot projects, the total number of reviews had the following results:

In parallel, reviews were left by our employees, and other visitors to the hotel and dentistry.

To be fair, it should be noted that regular promotional work was also carried out for each project in parallel with the experiment. Every two or three weeks we made slices according to the control data, and here are the dynamics in visits to the site that we observed throughout the entire period of the experiment: 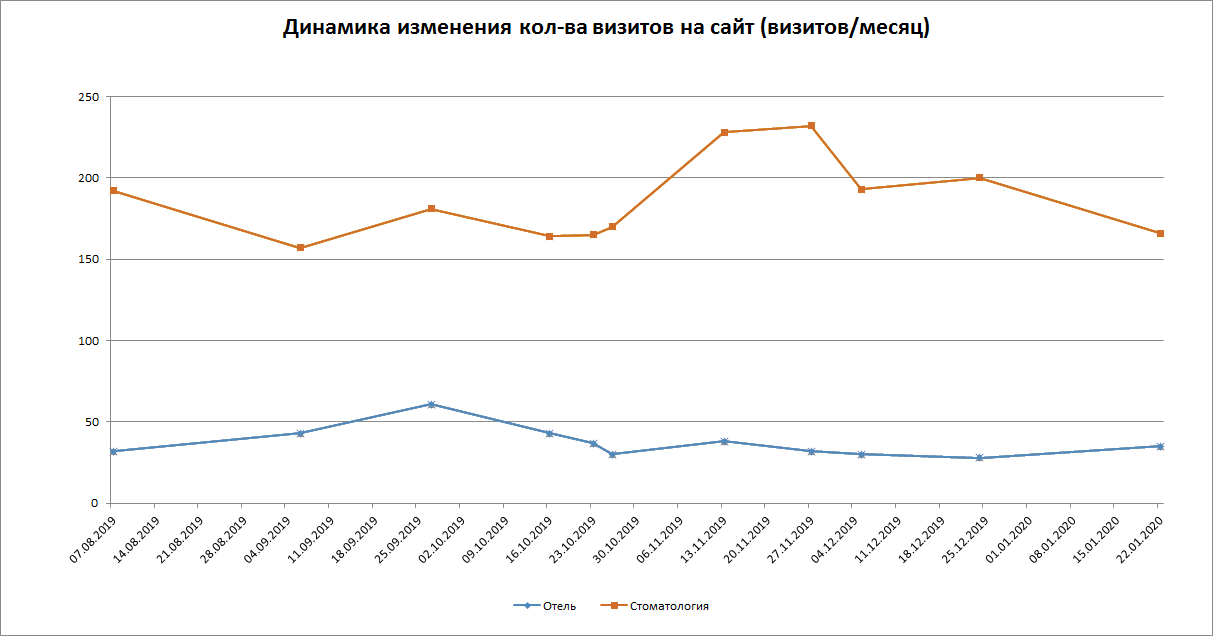 We see that during the experiment, the site has increased the average number of visitors, but there are differences in topics related to the seasonality of the business. So, if we talk about a hotel in a resort town, traffic has declined since October, as fewer people go on vacation. For dentistry the visits are connected with holidays.

The dynamics of positions is also interesting. Changes for the entire period for both projects are shown in the screenshot below: 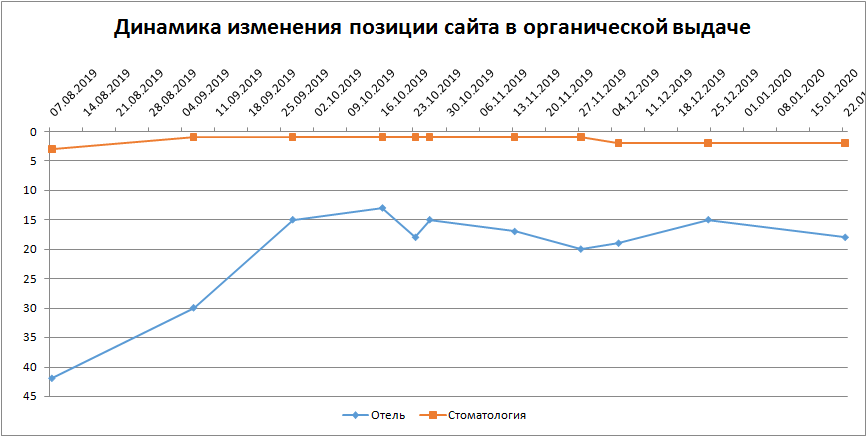 The website of dentistry was initially highly ranked, and over the period of the experiment, the value increased literally by one position, while the situation for the hotel is much more attractive.

Although it would be wrong to say that only reviews influenced the position growth. Work on the project development and optimization also yielded results.

The uneven indicators growth is due to the fact that search engines regularly update their algorithms, which in one way or another affects the sites, plus competitors also do not sit still.

Working with reviews on Yandex.Maps

As in pure SEO works, it is interesting to compare Yandex with Google - what works, how it works, what it affects, what features. Therefore, we simultaneously carried out work in both SEs.

For the experiment with Yandex.Maps, we took a boarding house and the law firm website.

Table 2. Input data for working with reviews on Yandex.Maps

The approaches to posting reviews and the requirements for them were similar to those of Google, but there are some nuances, if not problems.

The problem with reviews on Yandex.Maps is complicated review moderation. The rules for leaving a review on maps are pretty clear. But even taking into account all the nuances any review may not pass moderation, even a real one, regardless of the level of expertise the account had. An additional complication is that Yandex can record the account's geo during its existence and use this data to moderate reviews. If, according to Yandex, the user has never been to the region where the hotel (or any other company) is located, then the review may be considered implausible.

These difficulties were the reason to stop the experiment with Yandex maps. And these were also the reason for the higher cost of reviews, which was mentioned above. But even during this time we managed to get some results.

Let's start with traffic. Below is a diagram of traffic to the site from cards in cards:

It was not without seasonality, as we can see from the data on the traffic to the site of the boarding house.

But according to the legal services website, the curve looks more interesting: in the absence of reviews, there were no transitions from the card at all. After adding even a small number of reviews, transitions appeared.

For an objective analysis of the data obtained, let's see what was the attendance of the boarding house for the same period last year:

Compared to the same period last year, there were more visits, and the decline in attendance since October can be easily explained by seasonality.

The next, no less important data is the position change dynamics of cards on the maps. Here's what we got:

And here are the results of changing the positions of the site already in the organic search results during the experiment on the tracked request:

What results did the experiment show?

Reviews play an important role in promoting a business on the Internet. A separate direction is reviews on maps. The results of our experiment showed:

At the same time, we are not ready to say that improving the position of the card affects the increase in site ranking in organic search, since work was carried out in parallel with both cards and SEO for sites. We can only say with certainty that you need to work with different channels at the same time. The synergy of different channels gives better results than focused work on only one channel.

In general, reviews are good for any type of business: if positive reviews increase the reputation of a business, then negative reviews make it clear in which areas of interaction with the customer something can be improved.