Many factors influence the growth of visits, views, and even the number of orders on the site. One of the main factors is website loading speed in seconds. Users don't wait for a download, but simply follow another link to get a response to their request. In this battle, the one who is faster wins.

After reading the article, you will find out what should be the loading speed of the site and with the help of what methods it was possible to reduce the loading time from 14 to 4 seconds.

How did you speed up the loading of the site?

You need to repeat only three steps, and then the site will, as they say, just “fly”.

Let's consider each step separately on a specific example.

To evaluate the site loading speed, we used the webpagetest.org service, which allows you to comprehensively consider the site loading. Before starting work, we conducted a test and received the following data:

If you do not like the speed of your site and its content, we can always help.

I WANT TO IMPROVE THE SITE

The next stage of optimization was the include of the jQuery Lazy plugin to set up "lazy loading" of images.

What is "lazy loading"? This is a lazy loading of resources for displaying the site, that is, the requested page is not loaded completely, but is loaded in parts as needed. For example, if the image is set to "lazy loading", is at the very bottom of the page and the user has not watched the page to the very end, then the image file may not be loaded into the browser at all. This is mainly used for pages that have a lot of pictures, but as part of the experiment, we used lazy load for JS files as well.

Analysis of the "waterfall" diagram (see below) showed the presence of "heavy" images (on average 1.5 MB) placed in the slider. Since these images appear first when the page is loaded, they were excluded from lazy load. It was decided to compress them. 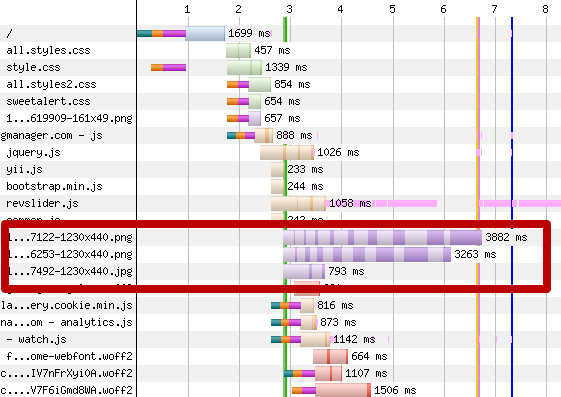 But we decided not to stop there.

The third step to speeding up your site is minification

We tried to minify (compress) and enable lazy load for JS scripts. So we won a few more fractions of a second, as can be seen in the screenshot below:

But it was found that because of this, some blocks began to display incorrectly. To avoid this, some scripts were excluded from minification and lazy loading.

From the data obtained, it follows that minification and other manipulations with JS scripts must be carried out in stages, testing each change.

The use of lazy load significantly reduces the page loading time of the site, but the best result can only be achieved in combination with other optimization methods.

We don't stop there. Experiments in the direction of optimization continue.